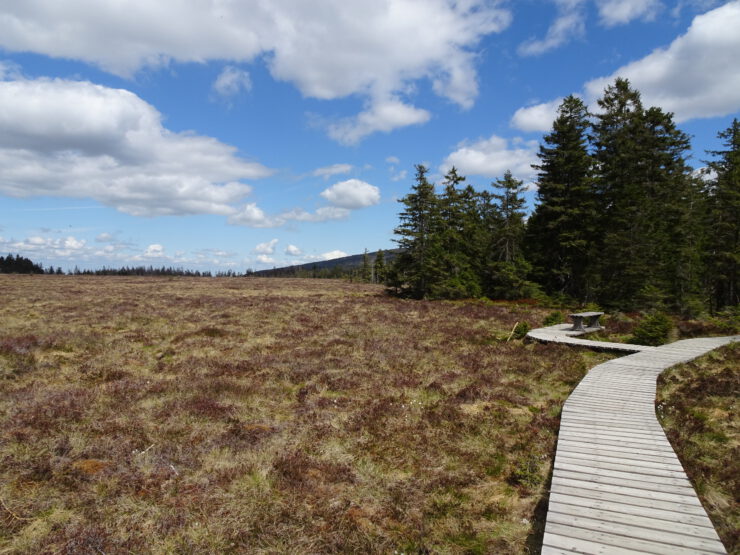 The hike in the Harz Mountains starts at the idyllic Lake Oderteich, which is part of the UNESCO world heritage “Oberharzer Wasserwirtschaft”. Then, the fairy tale road (Märchenweg) guides you through a black forest. You will hike over wooden boardwalks through the peatlands of Torfhaus and over the Kaiser path to Oderbrück and back to Lake Oderteich.

General information for your hike in the Harz mountains

A diverse and picturesque trekking route in the Harz

The trek along Lake Oderteich and the peatlands of Torfhaus is a pretty, diverse, easy and picturesque route. Because the landscape was very beautiful, it took us 4:50 h instead of 3:30 h. We enjoyed the view and took many pictures, while having a long lunch break.

On one hand, you have Lake Oderteich, which is the oldest reservoir in the Harz and part of the UNESCO world heritage “Oberharzer Wasserwirtschaft”. The “Oberharzer Wasserwirtschaft” is a unique water-conduction system and one of the biggest preindustrial energy supply systems of the world. The creation of this system took place 800 years ago to use the hydropower for the mining in the region. Nowadays, parts of the system still functions to produce drinking water.

On the other hand, you walk through boardwalks over peatlands dominated by heather or trees, along the fairy tale road through the forest, where you find both dead and living trees.

It is spectacular to see that many dead trees during the trek.

Why are there that many dead trees in the Harz region?

For mining and constructions in the post-war era, large parts of the primal forests in the Harz region was deforested. To replant the forest, the foresters planted fast growing spruces. During the last years, storms, heatwaves and drought weakened the trees. This made them vulnerable for bark beetles, which especially love spruces that are older than 60 years. Spruces die on a large scale when the densities of the bark beetles and larvae become too high under the bark. While bark beetles are part of a forest ecosystem, they were able to reproduce quickly and kill many trees in the planted spruce-forest.

However, many dead trees does not mean that the forest is dead. In between the dead trees, new life grows in the form of many different tree species. Instead of having a managed spruce monoculture, the forest can grow back into its wild form. This great change provides new habitats for many different animals and plants. For instance, the dead trees function as an important nutritional source and habitat for mushrooms, insects, birds and microorganisms. They slowly decompose the wood and the nutrients, which then become accessible to stimulate plant growth. Next to this, the litter on the forest floor is also an important habitat for bugs, bees, amphibians, reptiles and mammals.

Hike along big roots on trail in the Harz

Next to the road, you find many fallen trees with its root network exposed to the air. When Janice was a child, her dad always told her that she should never stand below such a tree. It is dangerous, because it can fall back. Anyway, after having a good look at the trunk (strong and safe), we could not restrain ourselves and took a picture of this tree with its enormous roots.

At some sections of the trail, you see roots growing wildly over the road. It looks impressive, mystical and nearly unreal.

The fairy tale road leads us to the Torfhaus – a famous meeting point for motorcyclists. If you did not bring food for a picnic, this is the place to get lunch. You can get a typical German “Bratwurst”, fries or even sit down at a restaurant. We bought an ice cream and enjoyed the view on the Brocken, the highest mountain of the uplands Harz.

Afterwards, our hike in the Harz mountains continued through “Großes Torfhausmoor”, a large peatland around Torfhaus.

It is a beautiful route, which is also part of the “Hexenstieg”, translated as the witch’ path, a qualified long-distance walking trail of Germany. That trail is also on our “hikes we want to experience” list.

Boardwalks lead you over the beautiful peatland, covered with heather, small mosses and flesh-eating plants. An empty bench with a view over the peatland up to the Brocken functioned as a great lunch stop to eat some German bread and have a cup of coffee.

After recovering our energy levels, we continued the hike along the “Hexenstieg”, which runs into the “Kaiserweg” (translated as emperor’ road). We walked along streams with an orange brownish color.

Next to this, we have seen again dead and healthy trees, young firs and many Vaccinium myrtillus. Vaccinium WHAT? Yeah, our ecologist Ralph is speaking ;). It is the Latin name of the European blueberry, which is eatable and has medicinal properties. Some plants were bright red. We loved it and took many pictures of it.

However, why is the plant bright red, while other plants of the same species are green? Is the plant flowering or dying? Moreover, why do the streams have an orange brownish color?

We asked our ecologist Ralph to figure this out and got an answer: due to the exposure of direct sunlight, the plant produces a substance to protect the photosynthetic apparatus (production of anthocyanin). This results in a bright red color. Remember, many trees died due to drought, which then exposed the European blueberry to direct sunlight. Therefore, the plant is not flowering, but also not dying (yet).

The second question: the orange hue of the water. The streams have an orange-brown color instead of blue, because of humic substances. The humic what? The formation of these substances takes place when organic material (peat / dead plants) is partly decomposed and gives the water its orange-brownish color.

The last part of the trail leads you again along the east side of Lake Oderteich until reaching the parking spot.

That was a great hike!

Is it warm enough and do you feel like going for a swim? Parts of the west and east side of the Oderteich function as recreation area where you can sit down, rest and enjoy the sun. Do you dare to have a swim in the lake? It will be nice to cool down from the hike and end the day.

Do you feel like eating a delicious German strawberry cake as a reward? Then check out our recipe here.

Did you already go hiking in the Harz? Which activities can you recommend there? 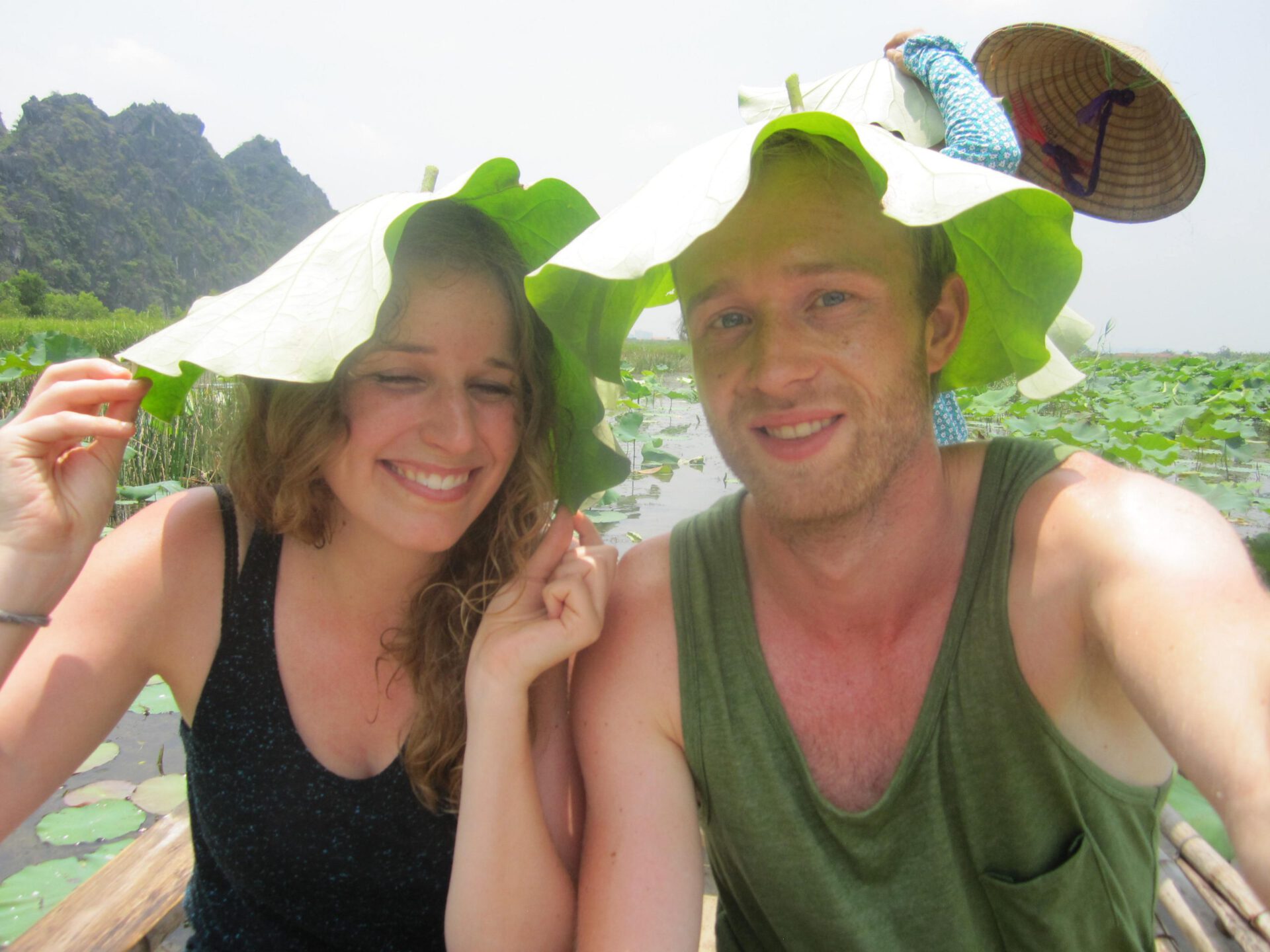