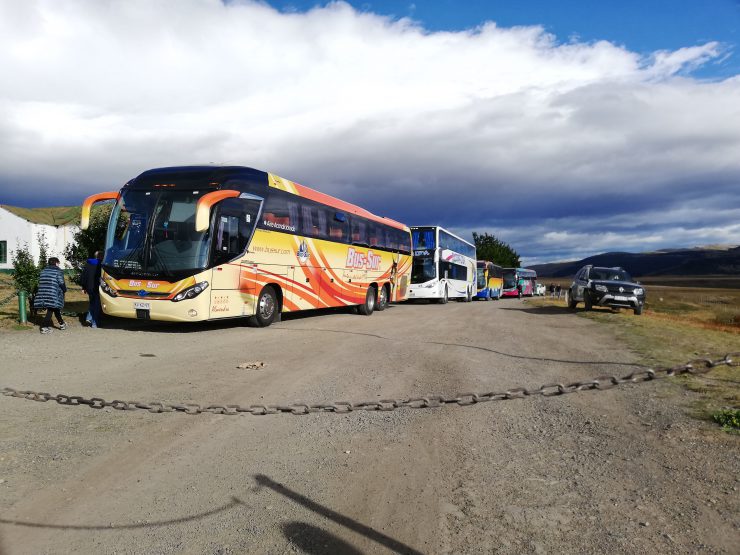 After coming back from a 5-day hike without any cell coverage, the news hit us hard (13-3-2020). The health system of Italy is overloaded. Schools and kindergartens are closing in Germany, people have to work from home and restricted public transport. Our family and friends asked us whether COVID-19 is affecting our journey and we said “no, not at all”! There are some flyers at bus terminals that inform you how to behave, but nothing more.

Our plan A was to cross the border to Argentina (15-3-2020). Our bus departed at 6.30 am. After arriving at the bus station and placing our luggage into the bus, we saw our hiking friend. She told us that Argentina declared a state of emergency and that all national parks are closed. Maybe we should not leave Chile. We had around 2 minutes to decide before our bus would depart. Our bags were one of the first in the bus; not easily reachable. What should we do? Okay, let’s try to go. If we cannot see the national parks, we can at least cross the border to Chile and further explore this beautiful county. We thought this would be a good plan, but then we arrived at the border.

Another bus was already waiting at customs and we had to wait for them; this took a very long time. We were stuck in the bus. No information, no way out. We waited, and waited, and waited. We heard rumours that Argentina might close the border completely and that people might not be allowed to leave the country. Do we still want to go to Argentina in this case? How bad is the situation? Finally, the bus driver came back and informed us that all people from Europe who entered Chile after the 29th of February are not allowed to cross the border to Argentina. We arrived the 4th of March (DECLINED). They told us that we could try to cross the border when we stayed in Chile for 14 days. Spoiler, the Argentinian government closed the border the next day.

Waiting for a decline

Anyway, we had to go out of the bus and wait (again) in a long queue for the border control, because they officially had to decline 90% of the passengers.

The atmosphere here was very strange, because everyone was confused because of a lack of information. Some people started crying. People had all sorts of problems.

We had to wait for about 5 hours at the border control. We were in bus number two, four more were waiting in line – the situation could have been worse. The bus turned and went back to the Chilean border control, where we checked out a few hours ago. After checking in, they took us to the only café close by and we had to wait again… for hours… for another bus to bring us back to Puerto Natales.

So what to do now?

No El Calafate, no Moreno glacier, no El Chalten.

Plan B (16-3-2020): we decided it was in our best interest to go north and have a good connection to the rest of Chile. From Puerto Natales, the only road to the north of Chile is through Argentina (DECLINED, remember). We booked a flight to Puerto Montt, and wanted to explore northern Patagonia from there.

Everybody we met had no idea what to do. Can we continue our trip or do we have to go home (but how)? And what will await us in the EU (no jobs, no home)? Do we get locked in Chile, if yes, for how long? Good information was scarce and changed very rapidly. Flight tickets were still available, but you could actually not take many of those flights, because countries were not letting people in from Europe. At the airport people tried everything to get home, but airlines were not helping (or could not) and many people were stressed.

Our plan was get a bus ticket and try to travel further. At the counter they did not want to sell us a ticket, because they didn’t know whether the bus was going to depart. We could try it at 6 o’clock in the morning. We threw out plan B.

Plan C (17-3-2020): rent a car together with a girl from Poland and travel south. However, people told us the ferries would probably stop taking passengers as well. If this would happen, then we would be stuck in a very remote region.

Another plan E (17-03-2020) was to work on a farm to save money on accommodations for the time being. However, will they be open for voluntary workers from Europe at the moment, and can we get there when travel is restricted? We don’t know…

We arrived in Puerto Varas and decided to walk to the lake to get a look of the two large volcanoes (18-3-2020).

Meanwhile we got a number from a local to get some insider information. Our internet ran out and we decided to walk to a park, do groceries and get back to our hostel. At the supermarket there was a line at the entrance; what is happening… Apparently, during the one hour without internet, Chile declared a state of emergency for 90 days (no flights, quarantine, no public transport, all shops will close except necessary shops like supermarkets and pharmacies, and the army most likely will patrol the streets, et cetera). THIS CANNOT BE HAPPENING! Limited people were allowed to shop and many products were already sold out, such as rice and toilet paper.

At the street we got weird looks, and other travellers were discriminated, because people thought they might be infected. The situation is deteriorating very rapidly, and we do not want to find out how it will end.

Plan F: (18-03-2020) go to Santiago de Chile and get out of the country as soon as possible. We booked a bus to Santiago on 19-3-2020. Now we only require a plane ticket. In the morning we almost got one, however, the internet was not functional during payment (bad luck strikes again). Prices doubled in a couple of minutes. Second chance, the credit card did not work (what did you say about luck?). We then spoke with the embassy and they recommended us to obtain a ticket at the airport, instead of online. This will be the first thing that we will do tomorrow (20-3-2020). Also, they recommended us to go to Santiago, because if the government will evacuate us, it will be from there. In addition, busses will probably not drive from the 20th or 23rd of March.

A big problem however, is the fact that Ralph is Dutch and Janice, German. Most likely both governments will not allow the other to board the plane if they have to make a choice, if a plane will come (we are not married, so we are legally “strangers”).

The last week we boarded an emotional rollercoaster, and we cannot get out! Before Torres del Paine, the world was doing relatively fine, and after it, it was collapsing. Our free travel spirit is slowly getting caught in the CORID-19 net. We have no idea what to do. At some moments we feel good and motivated, and the next we feel very sad, empty and uncertain about everything. We tried to stay positive, but we cannot cope with this much bad luck, chaos and insecurity. Luckily, many people from Chile, friends, families & former colleagues are really nice and try to help us as much as possible. Thank you! It also really helps to talk to other travellers being stuck in the same situation. Thank you as well!

We know that we have a luxury problem. The problems that countless people and countries currently face are grave. In particular in Italy, where their health system cannot cope with all the sick people and where doctors are forced to choose who will be treated. We hope, that humanity, can cope with this pandemic. We know for sure that the world will never be the same place again. Globalisation opened up many opportunities to explore new countries, meet people from different cultures and stimulated economic growth, but now shows its negative side.

Be strong and stay safe!